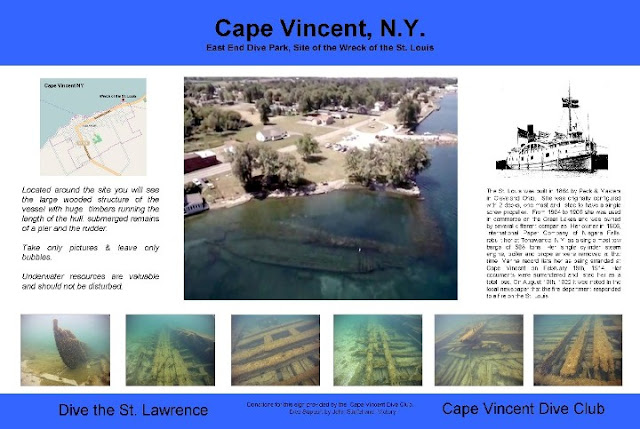 St Louis by SRHF on Sketchfab 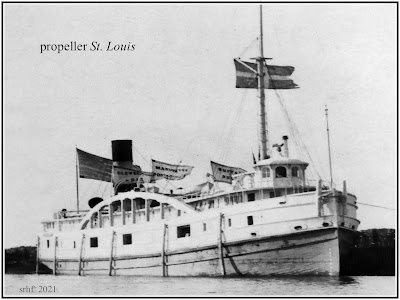 The remains of the St. Louis are on the down river side of the Cape Vincent Village Park and boat ramp. The park provides good shore access making the St. Louis a popular training site for scuba divers. Only the lowest part of its frames and hull remain. Next to the wreck is an old submerged rock filled dock. Several yards behind the wreck on the channel side is a very large rudder. Large wooded timbers run the length of the hull. These large timbers give an indication of the heavy cargo she could carry. Some of the timbers are over 2 feet square. Visibility is best early in the year. In late summer the hull is covered with thick weeds.

History:
The St. Louis was built in 1864 by Peck & Masters in Cleveland Ohio. She was originally configured with 2 decks, one mast and listed to have a single screw propeller. From 1864 to 1906 she was used in commerce on the Great Lakes and was owned by several different companies. Her owner in 1906, International Paper Company of Niagara Falls, rebuilt her at Tonawanda, N.Y. as a single mast tow barge of 588 tons. Her single cylinder steam engine, boiler and propeller were removed at that time. Marine record lists her as being stranded at Cape Vincent on February 18th, 1914. Her documents were surrendered and listed her as a total loss. On August 19th, 1922 it was noted in the local newspaper that the fire department responded to a fire on the St. Louis.
Home
Subscribe to: Posts (Atom)