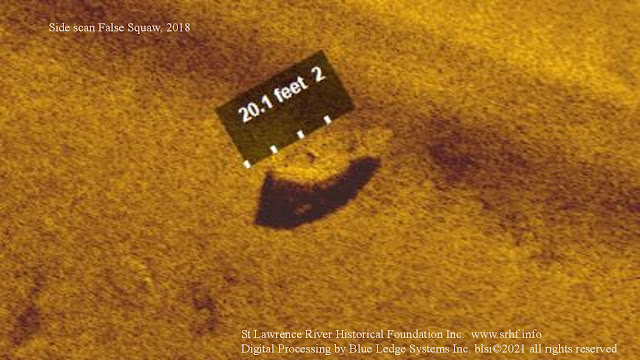 False Squaw by SRHF on Sketchfab 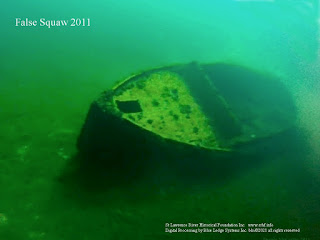 An old motorized wooden  boat about 22 feet in length, it lays 600 feet off Clayton’s west end waterfront. The hull is upright with a slight lean to the port. Heavily covered in zebra mussels, the boat appears to have been stripped before sinking. Wooded panels that supported a windshield are still in place. There is no motor, wheel, lights or metal work on the wreck. This wreck is located about 50 feet east from the underwater power cable that feeds Grindstone Island from the village of Clayton.

The False Squaw derives its name from a story of a wreck in the 1970s’. Clayton Diving Club members Skip Couch and Charlie Bender reported finding an entirely intact 30 foot long work boat. The wreck appeared as if it had just sunk and was complete with cabin, wheel, brass fittings and motor. It was discovered at the end of their dive and they took visual bearings to relocate it. On its stern in brass letters was the word Squaw. Subsequent attempts to re-find this wreck were unsuccessful. It became a mystery because it was never found again. In March 2011, a wreck near the purported location of the Squaw was discovered with side scan sonar. It, like the Squaw, had no record in local newspapers or archives. A smaller boat than the Squaw, it appears to have been stripped of all fittings before sinking. The divers named the wreck the False Squaw. Speculation is that the Squaw was raised and the False Squaw was discarded after it became of no use.