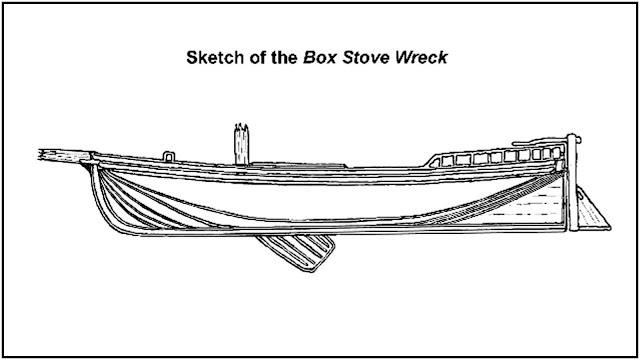 Known shipwreck since 2011
Cape Vincent: Near Village of Cape Vincent The Box Stove wreck was found in 2011 by Dennis McCarthy and Skip Couch. Its name and origin are unknown as of the publishing of this site. The wreck appeared to be a sloop that had been de-masted after it was sunk.

The major feature of the wreck is an iron box stove and the nearly intact drop centerboard still in its box. The site is listed with New York State Historic Preservation as an archeological site.

Box Stove Wreck has only had a visual survey. The determination that it was sloop-rigged was made from the observation of only one set of chainplates. The hull was not excavated to verify the number of mast steps. A review of ships that wrecked near Cape Vincent indicated that the most likely candidate for the wreck of her size was a sloop named the Benecia Boy. There are no pictures of her.

In a recent review of shipwrecks near Cape Vincent, a picture of a schooner Highland Beauty was compared to the Box Stove Wreck. Built-in 1877 it was originally listed as 80 feet in length and 78 tons. It has been determined that it was rebuilt in 1902 to 58 tons and shortened to about 50 feet. The picture has a striking resemblance to the Box Stove Wreck including a cabin and stove. More research is needed before the actual name of the Box Stove Wreck can be determined.

The Highland Beauty wrecked on the breakwater at Cape Vincent, NY, on November 13, 1906, with a cargo of grain.