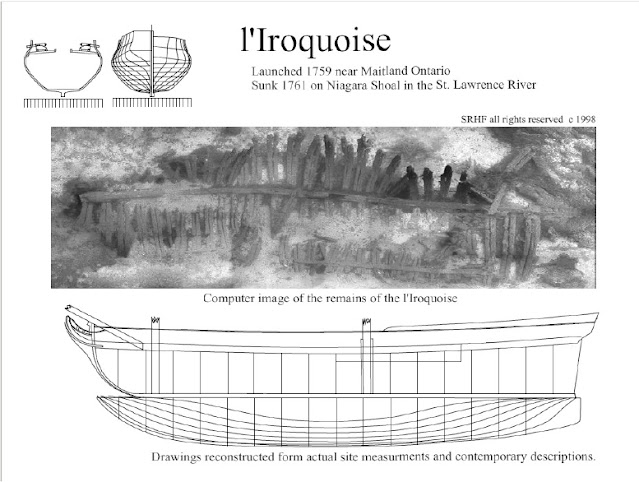 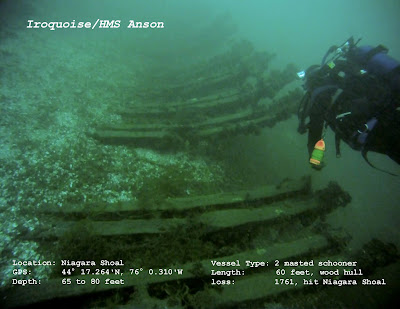 Known dive site since 1960
Location: Niagara Shoal
GPS: 44° 17.241'N, 76° 0.267'W
Depth: 65 to 80 feet
Bottom: Rocks and current Site:
Build Year: 1759
Build location:  Point au Baril, modern Maitland Ontario
Vessel Type: Schooner
Hull: Wood
Builder: Louis-Pierre Poulin de Courval Cressé
Propulsion: sail
Length: 60 feet.
Beam: 20 feet.
Depth of hold: 10 feet.
Date of loss: 1761
Cause: Cast away
Wreck:
The wreck is the remains of an 18th Century French and Indian War ship. It lies on a shelf in about 65 to 80 feet of water behind the head of Niagara Shoal. Only the keelson and lower part of the frames remain. The stern of the ship is at 65 feet and has been broken apart. The starboard frames project up about 10 feet from the bottom while the port frames in the stern are almost on the bottom. The keelson is broken at mid-ships and has a slight bend. You can see the hole for the base of the main mast. The bow is in 80 feet of water. Up shoal from the bow in 65 feet of water are the remains of a triangular crib of hand hewn logs that may have been a part of the attempt to get her off the shoal in 1761. To the down side of the wreck is a very large granite base and wooded spar buoy that was dropped on the shoal after it was no longer used as a channel marker.

History:
The site is the resting place of the Iroquoise, a French built war vessel that was launched in 1759. It was captured by the British in 1760 and then renamed the Anson. In 1761, it struck Niagara Shoal and was salvaged and burned to the water line before the winter ice pushed it off the shoal in the spring. The remains of the vessel were visible during the fall of the year when the temperature of the St. Lawrence River dropped and the water clarity improved because of a reduction of algae. As late as 1919, newspaper articles described the visible remains of a vessel of war in about 25 to 30 feet of water. It was assumed at the time to be a war vessel due to the fact that numbers of cannon balls, shot, and weapons had been found on islands adjacent to the shoal. In the early 1960's, scuba divers found and recovered from the vessel three cannons and an anchor. Two of the cannons were of French origin and the third was English. The anchor had been damaged; one of its flukes broke off when it was caught under the side of the barge that was raising it. The anchor's very large ring was wrapped in tar-coated burlap. One of the French cannons was given to Jefferson Community College in Watertown and is currently on display in the commons of that facility. The other two cannons and the anchor were in the Binghamton, NY area.